The Foundation series ended unsettlingly, and slightly anti-climactically, with “Foundation and Earth”. The constant debate between Trevize and Bliss over ‘Gaia vs Isolatism’ was interesting and gave much food for thought, and the technical explanations littered throughout the rest of the book were ingenious and worthy of appreciation. However, I am not entirely happy with the logic advanced by Trevize for his final decision.

A summary of his argument is that in the debate of ‘Gaia vs the Second Empire’, Seldon’s Plan, in discounting the possibility of other, non-human forms of intelligence, would fail. Therefore, to ensure the survival of humanity against threats from outside this galaxy, it would be necessary for human beings to unite and form one Galaxia to stave off external divisive attacks.

This argument, albeit with its merits, seems to take an entirely different tack from Trevize’s main refrain throughout the book: that it is one’s individualism and free will, enabling dissonance, debate and rebellion, that sparks reform and advancement of the species; also that human beings are human beings mainly by virtue of their free will, and to rob them of this would not necessarily be a good thing.

I can understand that when Trevize discovered the looming threat of invasion from other galaxies, possibly by more advanced forms of intelligence, he resorted to humans’ inherent instinct for strength in numbers, and saw the merit of Galaxia. However, the question is, is it worth sacrificing your free will and humanity while humanity lasts in order to guarantee survival? Isn’t it better for humanity to perhaps risk dying out earlier (in the grand scheme of things) in exchange for retaining their free will, what makes them most human?

Finally, I’d like to share my deepest mistrust of Fallon and abhorrence of the cliffhanger Asimov finished “Foundation and Earth” on. My dear man, the sequels were supposed to give us closure – not leave us more unsatisfied than “Second Foundation” left us! In hindsight, I preferred the comparatively neat ending of “Second Foundation”, with its calming implication that the Seldon Plan would run its course, putting humanity back on track.

While this may be societal “inertia”, as Pelorat may have said, I like the idea of human beings remaining, in the most fundamental sense, the way we are. In essence, in the “First Foundation vs Second Foundation vs Galaxia” debate, even though I think the Second Foundation as ultimate rulers might have been less than ideal, I would much prefer it to Galaxia, where people are happier but in a sense opiated. Although, it may be that as the Second Foundation developed we may have ultimately come to a crossroads where the idea of Galaxia was thought of independently. So maybe what I resent is its external enforcement? I’m beginning to feel that I’d be happier with the decision (happier, not happy) if it had been made by the Second Foundationers, who after all represent a gradually evolving humanity rather than human-robot bastards (meant in the standard dictionary definition – no profanity intended). This would mean that we had made the decision for ourselves, rather than having someone – even if in consultation with a (single) human like Trevize – force it upon us.

Why is this difference important, you may ask? Well, mainly because robots possess only an external view of humanity – they of necessity focused more on the literal survival of Homo sapiens than the propagation of humanity with the essence intact – free will.

It can be argued that Trevize decided in favor of Galaxia mostly as a result of the sudden realization of the threat of annihilation in the future. He may not have been able to really weigh the philosophical and finer points of the decision he made.

Anyway, this is what makes me uneasy about, and unhappy with, Asimov’s conclusion to the Foundation series. If you have any points to add, or a different perspective to offer, I’d love to hear from you, so please drop a line in the comments section. 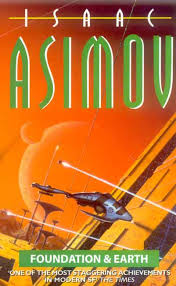