Daily Prompt: Person of the Year

You’re asked to nominate someone for TIME’s Person of the Year. Who would it be, and why?

I don’t know all that much about politics. My general knowledge and awareness barely covers things like the unrest in Turkey and Edward Snowden’s uncovering of the NSA’s spying activity. So no, I don’t think I’m qualified, rather, aware enough, to name anyone as person of the year.

But I am keenly aware of what people I know have been through this past year. Several friends have struggled with their education, my roommate has had on-again, off-again depression because of a guy she’s seeing, and yet another friend questioned humanity itself, saying we don’t deserve to exist. I’ve seen nearly everyone I know, whether I like them or not, fight their own battles. One friend lost a father a year ago, another  has fought her weight and managed to lose some, and so on and so forth.

I looked up today’s Figment Daily Theme a while ago:

A writer must learn empathy, that ability to fully understand the emotional life of others. Yes, even those we find depressing, boring, or plain old annoying. It’s that understanding of others that helps us shape compelling, three-dimensional characters.

Take a peek at the News Feed of someone you once hid on Facebook, or unfollowed on Twitter, and select a particularly grating recent post (Maybe: “Off to Zimbabwe then Paris! Pictures to follow! Send me a postcard from wherever you are!”), then write at least 500 words in the voice of that person about that post, in a way that helps you better understand him/her without anger, annoyance, or judgment.

…and was stumped. I trawled through old friends’ walls, searching for something good to use to spur my writing. That’s when I realized how much I’d changed. I was spending time with people I really connected with now, people who cared about me too. I was open to new experiences, and more confident about myself and my abilities. As a result, I was  less constricted, much happier, and a more developed, mature person than I’d been a while ago.
So I dedicate my allocated CyberAward of the Year to all of us. We have all grown this past year, no matter what the cause, what the field and what the reason. We have improved our lives and, whether we realized it or not, also had an impact on the lives of those around us. Just ask a friend and see, I dare you to. And isn’t that what this award is about? To have brought about a change in the world, one that affected others and was appreciated? You are an inspiration to several because of how far you’ve come.
Go ahead, take that badge and pin it on. You deserve it. 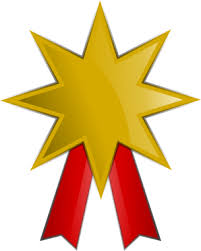