I read today that Orson Scott Card, author of Ender’s Game, is under fire because of his anti-gay marriage statements. Yes, they were slanderous. Yes, they were intolerant. Yes, I understand the urge of the LGBT community to boycott the franchise. No, I don’t believe in subjecting the entire cast and associated crew to the disapproval caused by the opinion and behavior of one man. And, you know what? Even if it’s hateful, he still has a right to his opinion. God knows we all thought marriage was between one man and one woman until we learnt more about other forms of sexuality.

“I disapprove of what you say, but I will defend to the death your right to say it” -Evelyn Beatrice Hall [illustration of Voltaire’s beliefs]

While reading more about this, I came across a very insightful comment: that this problem didn’t exist while only readers were involved. The conjecture is that readers care only about the world created in a book and its content, and less about the metaphorical cover. That made so much sense to me. In fact, it’s my personal mind-opener-of-the-day. 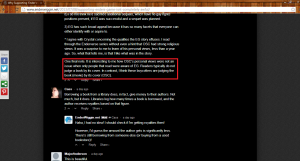 thought of the day

I’d never thought of that before. But it’s true – all the hype and judgement only really started once the movie was talked about. I had to make a conscious effort to not fly off the handle every time Card was vilified. I understand why this is happening, and I’m pro-equality, so I was hurt by his comments as well. It’s just disappointing really, because the book played a big role in shaping me. And to me the guy was a hero. And to find out this is like an idol failing you. Not his fault really. It’s just ironic and sad that a teacher of tolerance is intolerant.

And at the end of the day, I’m still indebted to Card and thankful to him, because he gave me Ender, and made me the person I am today: confident, tolerant, pro-equality, and pro-justice.

*NB: This blogpost was excerpted on an Ender’s Game fansite! They’re pretty amazing, so if you’re a fan, you can go check this post and others out at: http://endersgamefandom.net/2013/07/11/enders-game-controversy-turning-into-battle-school/

3 comments on “Ender’s Game Shaped Me”